Bio: Hunter was born into a reclusive tribe of people in the Applachias who have their own language, their name in English translates into Nature's Chosen. They believe they are the last pure humans on the face of the Earth and are the people who will save the human race when the world as most people know it. They hate modern technology and believe it has made people believe they are better than Nature AKA the common name for the god they worship. Hunter is one of the only people who speak English in the tribe and has been sent out to prove to people that the only way to survive is their way. They also partipcate in a ritual they call "Humbling" which when they find someone in their forest, they kidnap steal their possessions and horribly disfigure them then let them go, and burn their possessions in tribute to Nature. They also have a system of classes when a child is born, the town priest deems them one of two things. A bear or a snake. After this, Bears meaning they will be the strong, leader types that the village need while snakes are the people who serve those bears. They also eventually are tattooed with a bear or a snake, which is why Hunter has a bear tattoo on his shoulder. The tribe believes that most of the world are snakes.

Sorry if this is long af, just got flesh out his backstory and what his tribe believes to flesh him out lol
_________________
Superstars
Adam Valentine
El Tigera- 1x TV and Last  Champion, 2x and First Internet Champion
Samuel Pine 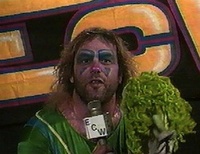