I Live For This

I Live For This

Jason: In the past few weeks, I've taste my own blood more than I have in a long time.

The scene fades in, revealing Jason Spade sitting on a chair, the Zero G Championship glinting on his shoulder/

Jason: And throughout this whole season, I've tasted defeat even more than that. It's bitter, like a rotten apple... And it sticks with you, and drags you down. It makes you wonder what it is you really fight for... Makes you wonder what the point of it all is... And I'll admit, I almost fell into that trap. But then I remembered who I am... And I remembered why I do this.

I don't do it for the money. I don't do it for the fame, or even to travel the world. I do this... Because a long time ago, there was a small child sitting in his bedroom, listening to his parents arguing for hours and hours, who wished he could stop it... Because there was a boy who went through his school being beaten and bullied by everyone around him... Because there was a young man who, if he'd only had the strength to push a little bit harder, could have gotten everything he'd ever wanted... I do this because that child, that boy, that young man wasn't strong enough...

I do this because it pushes me to be what that child always wanted to be. A warrior... A badass.... A man who never gives up... And the best thing about it is that along the way, I find other warriors- other badasses- to test my mettle against.

Men like Ace Reeves, and Stefan Hastings, my opponent at Battlescars. Stefan, I know a thing or two about scars...

Jason: I got this one when I was beaten down by some hired thugs in Los Angeles. And these...

Spade lifts up his shirt, revealing some scars on his chest.

Jason: A barbed wire deathmatch in Japan, a long, long time ago... And this...

Spade pulls down his shirt collar, revealing a particularly nasty scar just below his Adam's apple.

Jason: Emergency surgery after having my throat crushed in an iron man match. My point is... I've been around the block. I've seen and done horrible things, for the sake of doing what I love... For the sake of being that warrior, that badass. And somehow, Stefan, you gave me one of the toughest fights I've had in years... And now, we get to do it again.

Jason holds the Zero G Championship up to the camera.

Jason: Stefan, I'm a realistic guy... You might take this from me at Battlescars, but you'll have a hard time if you think that just because you got me once means you'll get me twice. The list of people who've beaten me once is bigger than Shay Hoxton's ego, but the list of people who've beaten me twice? Single digits, my friend. I live for this, and I'll die doing this. So bring your A-game... Bring the best that you possibly have, because I want to see it. I want to feel it, and anything less... And you'll be going home empty handed.
_________________
Jason Spade
#NotDeadYet 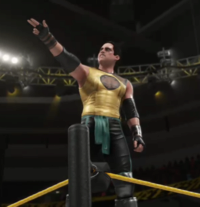