This is the greatest wrestling show this side of the Mississippi, the black and white lovechild of a twelve year old boy and a rich Nascar fan, this is highlight of your Friday night.

The Supremacy audience wait with bated breath for the arrival of the next wrestler. Who could it be? A heroic role model? A gravity defying superhero? A true CMV legend?

No, it’s just a 29 year old piece of shit. Boos fill the arena as the screen flashes that god awful name: Hoxton.

Out walks the man himself. Bright yellow tights, bright red tank top, bright pink glasses, earrings, and a gold chain to boot. Shay Hoxton, International Champion, don’t forget. With the title around his waist and a microphone in his hand, he give the crowd a smile before bringing the mic up.

You know, I’m not really feeling the love.

Boos ensues, a dooze for any of the social trues, but a perfect muse for Hoxton’s news ruse.

I was planning on philosophising a little bit, talk about my past and my beliefs, but my time is being wasted already so let’s cut the crap.

Listen here, I don’t know who you are, but I’m pretty damn sure I know what you are, and I don’t like it. I’m pretty sure you’re one of the ten thousand wannabe legends who hop from company to company, leaching off of hard workers like me to get as much exposure as humanly possible. You show up, you wrestle, you leave. You don’t have a heart, you don’t have a soul, and you damn sure don’t have a personality. All you have is a little paycheck and the hope that if everybody knows your name then everyone will care about you. I don’t think I need to be the guy who lets you know that’s not how this world works, am I?

What really pisses me off is that I’ve worked my ass off to walk as far in the opposite direction as possible. I’m Shay Hoxton. If Shay Hoxton is on your show, it’s an accomplishment. My time is valuable, my name is valuable, I am valuable. I don’t show up, work, and leave, I transform every company I’ve ever stepped foot in. And now I have to waste my valuable time and energy fighting someone like you.

But don’t think I’m picking on you, Johnny. I mean, I am, but a faceless dork like you is just a symptom of the real problem. After all, let’s look at the grand scale. We had a battle royal full of nobodies to determine a number one contender for the International Championship.

We had
a battle royal full of nobodies
to determine a number one contender
for the International Championship.

“Oh but Shay!” I hear every original critic yell.
“You lost to Andrew Briggs!”

He speaks in a very mocking tone.

So for all of my hard work, what do I get? Do I get an Undisputed Championship match? Do I get a number one contenders match? What about a match for a ‘unique opportunity’? Do I get anything? Oh, I get paired with a ring full of nobodies, perfect.

“Oh but Shay, you got an International Championship match!”

You’re right, that’s where I beat arguably the strongest man in CMV today, no tricks, clean, 1-2-3 in that ring. My prize? Johnny Myles. The loser’s prize? Match with Chris Proudfoot.

And who’s making these matches? None other than that CMV legend I embarrassed in under four minutes: Xander Slate.

Now, Slate, I don’t know whether you’re bitter, or just plain stupid, but let’s get one thing very clear. I am the most talented man who’s ever set foot in that ring, Supremacy, CMV, or otherwise. You have two options. You can either treat me with the respect I have earned, or you can hurt you own show by wasting my time and the time with these freelance wannabes. One results in you beating Ken Donahue in every demographic, the other results in a phone call to your rating rival, one that I think he’ll find…

Shay unbuttons the International Championship and holds it up to the camera.

Very valuable indeed. The choice is yours, boss. Oh, and Johnny, no hard feelings, it’s just business. You of all people should understand.

Shay drops the mic and holds his title high above him. The screen fades to black.
_________________
Shay Hoxton
The Best Guy Here, Change My Mind
1x Anarchy Champion - 2x International Champion (current)
Danger Cat
One Half of Los Felinos Fatales and the Killer of my Credibility as a Writer
Janet Torre
One Pissed Off Old Lady
Mystery Mask III
What? 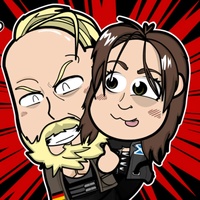